The best Vegan Chocolate Buttercream Frosting made with shortening and vegan butter, powdered sugar, cocoa powder and vanilla for the creamiest, smoothest and richest frosting for cakes, cookies, brownies and cupcakes!

Now, most chocolate frostings call for nearly twice the amount of sugar than I use here. Even with the smaller amount I use here, they are still plenty sweet. I used a lot of cocoa powder so that it tastes super chocolatey.

HOW TO MAKE VEGAN CHOCOLATE FROSTING

First, you will need to gather these 6 ingredients:

You will need a very large bowl for this. Add the room temperature vegan butter and shortening to the bowl and beat on low until mixed.

Add the cocoa powder slowly, a small amount at a time, until just mixed. Add the powdered sugar a small amount of time, beating in between each addition, until fully mixed. If you try to dump it all in at once, the sugar will fly everywhere!

Add the milk and extract and briefly beat in. It should be light and fluffy as pictured. If you want it smoother, add just a touch more milk.

Store in the fridge if not using right away and let it come back to room temperature and soft before piping onto the cupcakes or cake. This frosting can be stored in the freezer for 3 months. This frosting is especially delicious on these Vegan Gluten-free Chocolate Cupcakes!

OTHER VEGAN FROSTINGS TO TRY:

If you make any of these recipes, be sure to leave feedback below and share your pic on Instagram or Facebook and tag me @thevegan8 #thevegan8!

Brandi Doming
The best Vegan Chocolate Buttercream Frosting made with shortening and vegan butter, powdered sugar, cocoa powder and vanilla for the creamiest, smoothest and richest frosting for cakes, cookies, brownies and cupcakes!

This frosting can be stored in the freezer up to 3 months. To use, thaw in the fridge overnight and then set out on the counter to come back to room temperature and soften. Once soft, beat lightly until fluffy and smooth before frosting a cake or piping onto cupcakes. This frosting makes enough to frost 12-15 cupcakes or 1 9 inch cake. Double the frosting if making a 2 layer cake. Nutrition per serving (based on 14 cupcakes): 191 calories, 13.8g fat, .7g protein, 18.4g carbs, 1.4g fiber, 16g sugar, 69mg sodium
Tried this recipe?Tag @thevegan8 on Instagram and use tag #thevegan8!
Keyword dairy-free chocolate frosting, vegan chocolate buttercream frosting, vegan chocolate frosting
Previous Post: « 12 Vegan Beach Recipes
Next Post: The Best Vegan Chocolate Cupcakes EVER! »

I'm Brandi, creator of this vegan blog and cookbook author of The Vegan 8 Cookbook. The majority of my recipes focus on 8 ingredients or less, not counting salt, pepper or water. I'm an expert on oil-free cooking and baking! We went vegan to help control my husband's debilitating gout. Our lives and health improved dramatically. While my husband still has some challenges, his health is much better than when we were eating animal products! I create delicious vegan comfort food in a healthier way. read more → 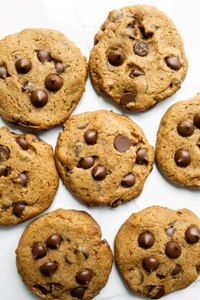